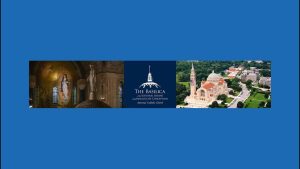 The Basilica of the National Shrine of the Immaculate Conception in Washington D.C., is a Catholic church dedicated to the Blessed Mother, patroness of our nation. It is a place of worship, pilgrimage, evangelization, and reconciliation. Mary’s Shrine invites people from across the country and beyond to share in Christ’s ever-living presence.

Reading 1, Revelation 11:19; 12:1-6, 10
19 Then the sanctuary of God in heaven opened, and the ark of the covenant could be seen inside it. Then came flashes of lightning, peals of thunder and an earthquake and violent hail.

1 Now a great sign appeared in heaven: a woman, robed with the sun, standing on the moon, and on her head a crown of twelve stars.

2 She was pregnant, and in labour, crying aloud in the pangs of childbirth.

3 Then a second sign appeared in the sky: there was a huge red dragon with seven heads and ten horns, and each of the seven heads crowned with a coronet.

4 Its tail swept a third of the stars from the sky and hurled them to the ground, and the dragon stopped in front of the woman as she was at the point of giving birth, so that it could eat the child as soon as it was born.

5 The woman was delivered of a boy, the son who was to rule all the nations with an iron sceptre, and the child was taken straight up to God and to his throne,

6 while the woman escaped into the desert, where God had prepared a place for her to be looked after for twelve hundred and sixty days.

10 Then I heard a voice shout from heaven, ‘Salvation and power and empire for ever have been won by our God, and all authority for his Christ, now that the accuser, who accused our brothers day and night before our God, has been brought down.