Let us join with the Angels and Saints to worship and glorify the Lord! Participate in this beautiful celebration of the life and death of Christ.

Reading 1, First Kings 17:10-16
10 So he went off to Sidon. And when he reached the city gate, there was a widow gathering sticks. Addressing her he said, ‘Please bring a little water in a pitcher for me to drink.’

11 She was on her way to fetch it when he called after her. ‘Please’, he said, ‘bring me a scrap of bread in your hand.’

12 ‘As Yahweh your God lives,’ she replied, ‘I have no baked bread, but only a handful of meal in a jar and a little oil in a jug; I am just gathering a stick or two to go and prepare this for myself and my son to eat, and then we shall die.’

13 But Elijah said to her, ‘Do not be afraid, go and do as you have said; but first make a little scone of it for me and bring it to me, and then make some for yourself and for your son.

14 For Yahweh, God of Israel, says this: Jar of meal shall not be spent, jug of oil shall not be emptied, before the day when Yahweh sends rain on the face of the earth.’

15 The woman went and did as Elijah told her and they ate the food, she, himself and her son.

16 The jar of meal was not spent nor the jug of oil emptied, just as Yahweh had foretold through Elijah.

8 Yahweh gives sight to the blind, lifts up those who are bowed down.

9 Yahweh protects the stranger, he sustains the orphan and the widow. Yahweh loves the upright,but he frustrates the wicked.

10 Yahweh reigns for ever, your God, Zion, from age to age.

Gospel, Mark 12:38-44
38 In his teaching he said, ‘Beware of the scribes who like to walk about in long robes, to be greeted respectfully in the market squares,

39 to take the front seats in the synagogues and the places of honour at banquets;

40 these are the men who devour the property of widows and for show offer long prayers. The more severe will be the sentence they receive.’

41 He sat down opposite the treasury and watched the people putting money into the treasury, and many of the rich put in a great deal.

42 A poor widow came and put in two small coins, the equivalent of a penny.

43 Then he called his disciples and said to them, ‘In truth I tell you, this poor widow has put more in than all who have contributed to the treasury;

44 for they have all put in money they could spare, but she in her poverty has put in everything she possessed, all she had to live on.’

Reading 2, Hebrews 9:24-28
24 It is not as though Christ had entered a man-made sanctuary which was merely a model of the real one; he entered heaven itself, so that he now appears in the presence of God on our behalf.

25 And he does not have to offer himself again and again, as the high priest goes into the sanctuary year after year with the blood that is not his own,

26 or else he would have had to suffer over and over again since the world began. As it is, he has made his appearance once and for all, at the end of the last age, to do away with sin by sacrificing himself.

27 Since human beings die only once, after which comes judgement,

28 so Christ too, having offered himself only once to bear the sin of many, will manifest himself a second time, sin being no more, to those who are waiting for him, to bring them salvation. 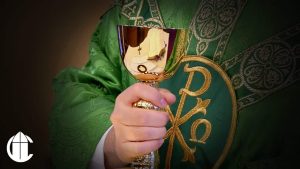